What is a Lithium iron phosphate battery?

The Lithium iron phosphate battery (LiFePO4 battery) or LFP battery (lithium Ferro phosphate), is a type of lithium-ion battery using lithium iron phosphate (LiFePO4) as the cathode material, and a graphitic carbon electrode with a metallic backing as the anode. The energy density of LiFePO4 is lower than that of lithium cobalt oxide (LiCoO2), and also has a lower operating voltage. The main drawback of LiFePO4 is its low electrical conductivity. Therefore, all the LiFePO4 cathodes under consideration are LiFePO4/C. Because of low cost, low toxicity, well-defined performance, long-term stability, etc. LiFePO4 is finding several roles in-vehicle use, utility-scale stationary applications, and backup power. Lithium iron phosphate batteries are cobalt-free. 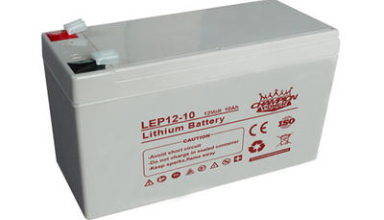 LiFePO4 is a natural mineral of the olivine family (triphylite). Arumugam Man thiram and John B. Goodenough first identified the polyanion class of cathode materials for lithium iron phosphate batteries. LiFePO4 was then identified as a cathode material belonging to the polyanion class for use in batteries in 1996 by Padhi et al. Reversible extraction of lithium from LiFePO4 and insertion of lithium into FePO4 was demonstrated. Because of its low cost, non-toxicity, natural abundance of iron, its excellent thermal stability, safety characteristics, electrochemical performance, and specific capacity (170 mA·h/g, or 610 C/g) it has gained considerable market acceptance.

The LiFePO4 battery uses lithium-ion-derived chemistry and shares many advantages and disadvantages with other Lithium iron phosphate battery chemistries. However, there are significant differences.

Like nickel-based rechargeable batteries (and unlike other lithium iron phosphate battery), LiFePO4 batteries have a very constant output voltage, which stays close to 3.2 V during discharge until the cell is exhausted. This allows the cell to deliver virtually full power until it is fully discharged, and it can greatly simplify or even eliminate the need for voltage regulation circuitry.

The energy density (energy/volume) of a new LFP battery is 14% lower than that of a new LiCoO2 battery. Also, many brands of LFPs, as well as cells within a given brand of LFP batteries, have a lower discharge rate than lead-acid or LiCoO2. Since discharge rate is a percentage of battery capacity, a higher rate can be achieved by using a larger battery (more ampere-hours) if low-current batteries must be used. Better yet, a high-current LFP cell (which will have a higher discharge rate than lead-acid or LiCoO2 batteries of the same capacity) can be used.

As lithium migrates out of the cathode in a LiCoO2 cell, the CoO2 undergoes non-linear expansion that affects the structural integrity of the cell. The fully lithiated and unlithiated states of LiFePO4 are structurally similar which means that LiFePO4 cells are more structurally stable than LiCoO2 cells.

No lithium remains in the cathode of a fully charged LiFePO4 cell. (In a LiCoO2 cell, approximately 50% remains.) LiFePO4 is highly resilient during oxygen loss, which typically results in an exothermic reaction in other lithium cells. As a result, LiFePO4 cells are harder to ignite in the event of mishandling (especially during charge). The lithium iron phosphate battery does not decompose at high temperatures.